Will you be celebrating Loy Krathong this year?

Thai culture is rich with colourful traditions and festivals, and if you are lucky enough to have the opportunity to attend one of these festivals, you are sure to have an unforgettable experience which you will remember for years to come.

In this guide you will discover everything you need to know about Loy Krathong — one of Thailand’s biggest and most impressive festivals.

Let’s get straight into it…

What is Loy Krathong?

Also known as the Festival of Lights, Loy Krathong is one of Thailand’s most magical festivals.

As to its origins, no one is completely sure. Within Thailand, it’s a commonly held belief that the festival originated in the ancient northern city of Sukhothai, although India can also lay claim to it. As with many events and practices in Thailand, it’s influenced by a melange of different cultures and beliefs.

The Thai word ‘krathong’ refers to a small, lotus shaped basket or raft fashioned from a piece of banana tree trunk and banana leaves (although in modern times, krathongs are often made from bread).

‘Loy’ means to float, which is exactly what the Thais do with these small rafts — they set them afloat on the water decorated with vivid displays of flowers and banana leaves, flickering candles, and scented with sticks of incense.

These krathongs are offerings to the Thai water goddess, Phra Mae Khongkha, to show their respect for the rivers and waterways that nourish the land and which for centuries have allowed them to transport goods to trade.

The festival also coincides with the end of the rainy season, and is considered a time to ask forgiveness and let go of negative thoughts and feelings, as well as to celebrate by making wishes and prayers for the coming year, and each candle has a prayer, memory, or wish attached to it as it floats away into the night. Often, the person floating the krathong will often add a strand of their hair or a fingernail to it along with some coins for added good luck.

Taking place at night, Loy Krathong is truly enchanting with hundreds of tiny glowing boats twinkling out across rivers and lakes, and is often accompanied by spectacular firework displays and flashy parades.

When is Loy Krathong?

Loy Krathong is an annual event which is celebrated at the end of the rainy season on the full moon of the 12th month in the traditional Thai lunar calendar — which for westerners corresponds to the month of November.

The Best Places to Celebrate Loy Krathong in Thailand

Although Loy Krathong is celebrated all throughout the country of Thailand, the most fantastic festivities take place in Chiang Mai, Sukhothai Historical Park, Bangkok, and Ayutthaya.

Want to know where to go and what to expect?

Read on to find out more…

The charming and ancient city of Chiang Mai in Northern Thailand is steeped in tradition and culture, and is one of the best places to enjoy Loy Krathong.

The evening before Loy Krathong takes place, hundreds of lanterns are released into the night sky at Tha Pae Gate in the centre of the city as part of the Yi Peng or full moon festival, as well as a lantern parade and a competition to decide who can create the most stunning krathong at the Night Bazaar. 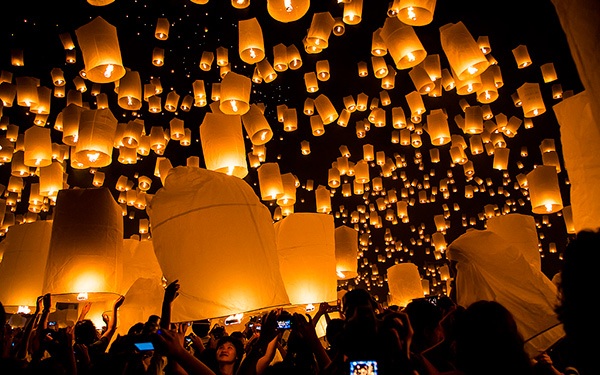 The following evening at sunset, locals and visitors arrive in their droves to set their krathongs afloat on the regal Ping River, with an official launch at Nawarat bridge.

The spectacle is accompanied by dazzling displays of fireworks and loud bangs from exploding firecrackers.

The festival finishes the following day, with an early evening parade of elaborately decorated floats and Thais in traditional garb which departs from Tha Pae Gate to the Office of Chiang Mai Municipality.

As most Thais believe that Loy Krathong festival originated here, it’s no wonder that the annual festivities to mark the occasion at Sukhothai Historical Park are some of the most stunning in Thailand.

Here Loy Krathong takes place over the course of 5 days.

The first day is dedicated to offering alms to monks at the Tra Pang Ngoen pond at daybreak. Evening performances of traditional Thai dance, music and theatre wow audiences at Wat Chana Songkhram on the second day. The third day is when the celebrations really start to take off, with all day open air dancing and theatrical, puppetry, and martial arts performances. Numerous vendors set up their stalls at the entrance and dotted around the park to sell their snacks and souvenirs, and ancient temples across the park are lit up with coloured lights. The evening of the fourth day sees an impressive light show along with incredible fireworks and dramatic dance displays in front of Wat Mahathat temple — a spectacular restored Buddhist monastery originally built in the 1300s. The pièce de résistance comes on the fifth day as Krathongs are released throughout the daytime and into the night, and there are even more sensational fireworks, light shows, and processions focused around Tra Kuan pond.

There are nine main venues across Bangkok with prepared fun-filled activities, cultural shows, fireworks, and more. Here there are stalls selling intricately crafted krathongs, snacks and handicrafts, as well as a floating procession of decorated candlelit floats, plus stunning firework displays and cultural performances.

For a slightly less crowded festival experience, head to one of the popular river temples such as Wat Arun or Wat Yannawa, or choose to celebrate in a more raucous manner with drinking, dancing, games and a beauty pageant at Kasetsart University.

Another important historical site and the capital of the ancient kingdom of Siam, Ayutthaya is the perfect setting for the traditional festival of Loy Krathong.

Just 80 kilometres north of Bangkok, festivities at Ayutthaya take place over 3 days, and are celebrated in unique Ayutthaya style.

Illuminated boats sail along the three rivers that snake around the ancient city, and a krathong-making contest along with beauty pageants, cultural performances and fireworks take place at at the Bang Sai Royal Folk Arts and Crafts Centre.

During the festival the centre of the city plays host to a huge market with over 300 stalls selling street food, handicrafts and souvenirs and more, all to the accompanying soundtrack of a plethora of free concerts.

Chandrakasem Palace National Museum, the Pridi-Thamrong Bridge and Suriyothai Pagoda are where the masses come to send their krathongs floating on the water, as well as enjoying shows and other entertainments plus a blazing display of fireworks.

What Other Countries Celebrate Loy Krathong?

Thailand isn’t the only country to celebrate the magical festival of Loy Krathong.

It is also celebrated in nearby countries including Vietnam, and parts of Laos and Myanmar where it is called Tazaungdaing.

Where will you be celebrating Loy Krathong this year?