You are at:Home»News»Oscar The Bangkok Rescue Otter Is All Of Us When We’re Hungry

Not many people would consider buying an otter as a pet – yet, if you explore the deepest, darkest recesses of Chatuchak Weekend Market, you’re more than likely to find a few caged up alongside the Pomeranian puppies, snakes, squirrels and sugar gliders, looking to be bought up by a naive would-be pet owners and tourists.

Oscar, a three-month old otter, was presumably one such commodity for sale.

He was found by a woman near Chatuchak last week after escaping his cage. Concerned for his welfare, she rang the Wildlife Friends Foundation Thailand (WFFT) who came to rescue Oscar, and provide him with a good home and proper care.

Oscar was identified as an oriental small-clawed otter (a classified Vulnerable species) and at such a tender age, would normally still be very dependent on his mother for milk and 24/7 company and care.

Destined to stay at the WFFT’s local wildlife hospital for the next few months, Oscar has proven that he is one hungry baby otter. 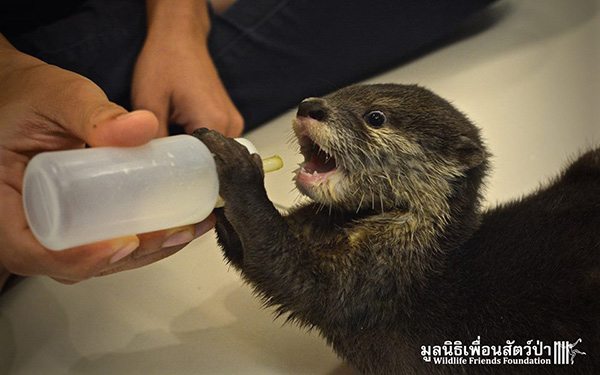 This little guy bloody loves his milk. Can’t get enough of the stuff. Sometimes he’ll even plump for a finger or a bit of t-shirt instead. He’ll be given round-the-clock care until he’s old enough to be socialised with the other otters cared for by WFFT. On their Facebook page, the WFFT warn about the seeming increase in otters being sold as pets in Thailand, and even reports of so-called otter farms where babies are bred for the pet trade. As they say, “Keep wildlife wild and not as pets”.