You are at:Home»News»Thailand’s First Halal Hotel Has Opened In Bangkok

In recognition of the fast growing Muslim tourist market in Thailand, the nation’s first official halal hotel has opened its doors.

The Al Meroz Hotel is located on the airport rail link route linking Suvarnabhumi airport to central Bangkok, near Ramkhamhang Station, and has been in soft-opening since November last year.

Certified by the Gulf Halal organisation in the UAE, the Al Meroz isn’t just serving up halal food to prove its Islamic credentials: there will also be no alcohol served and there will be a number of prayer rooms in the building.

60 percent of the staff are Muslim too.

But otherwise, the hotel looks to be like your everyday 4* hotel; there’s a large outdoor pool, meeting rooms, a gym, 3 restaurants and 242 rooms and suites.

The target market for the Al Meroz is undoubtedly the high end Muslim market, although non-Muslims are also more than welcome to stay too. Occupancy so far has hit around the 65 percent mark – mainly attracting guests from Asia and Europe – and is expected to reach 70 percent by the end of its first year.

฿1 billion (US$28.6 million) has been invested into the venture by the TS Family Group, who have high hopes for the opportunities offered by the growing Muslim travel market.

“Presently there are around 1.6 billion Muslims in the world, roughly 23 percent of the global population,” said Rausak Mulsap, president & CEO of the Al Meroz Hotel.

“It is projected to increase to 2.2 billion Muslims by 2030, which will reach 26.4% of the global population. This growth also claims a large share of the world’s consumer spending. Furthermore, there isn’t any halal-friendly hotel to cater Muslim travellers in Thailand, so we do not want to miss out on a huge opportunity in the halal tourism market.”

The hotel is projected to make ฿198 million in revenue this first year, and should break even within 10 years.

Mr Rausak has also spoken of the group’s intentions to form joint ventures with Muslim investors in order to develop halal hotels in resort locations like Pattaya and Hua Hin over the next few years.

Planning a stay in Bangkok? Get the best room prices for Al Meroz Hotel here. 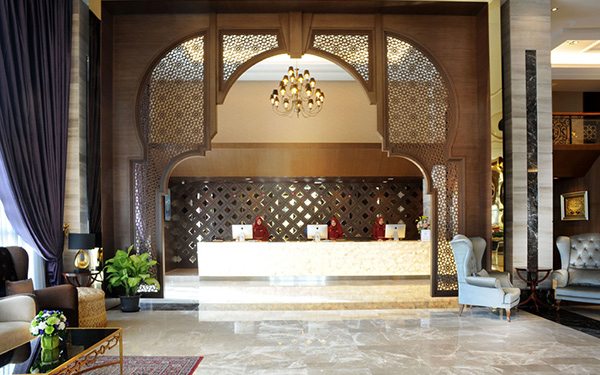 Is this the best halal hotel in Bangkok?