You are at:Home»Thailand»Thai Food Guide: The Fundamentals Of Siamese Cuisine

Thai food is one of the most beloved cuisines on Earth.

Whether you’re in a back street of Vientiane, Midtown Manhattan or even on the Alpine slopes, you can guarantee that there’s a Thai restaurant nearby.

But despite its international popularity, the complexity of Thai cooking and wealth of ingredients to be used means that Thai food often remains just a delicious mystery to its outsiders.

And maybe you’re happy to keep it that way.

But, if you’re anything like us — absolutely rabid consumers of knowledge — you’ll want to know everything there is to know about Thai cuisine from the ground up.

Don’t worry: we’ve got you covered.

Here, we present, the fundamentals of Thai cuisine.

Harmony is everything in Thai food.

A successful Thai meal will strike a delicate balance between the elements of sweet, sour, salty, spicy and sometimes bitter. Thais eat family style — sharing between lots of individual dishes — and the harmony should extend through the aromas, tastes and aesthetics of each individual dish all the way through to the balance of the entire meal experience.

David Thompson, the Australian head chef at Nahm, told a reporter in 2010,

Thai food ain’t about simplicity. It’s about the juggling of disparate elements to create a harmonious finish. Like a complex musical chord it’s got to have a smooth surface but it doesn’t matter what’s happening underneath. Simplicity isn’t the dictum here, at all. Some westerners think it’s a jumble of flavours, but to a Thai that’s important, it’s the complexity they delight in.

If the balance is off in a dish, say if your street vendor gets a little too handsy with the palm sugar, then the magic of that dish will be destroyed. Anyone with even the mildest understanding of Thailand is aware of the huge number of ethnic groups, foreign influences and distinct regions at play in the country’s culture, politics and, of course, cuisine.

It would probably be more accurate to group all the many different regional cuisines under the umbrella of Pan-Thai cuisine, rather than looking at it as a homogenous whole.

Added to these regional trends is the fact that many individual families pass down idiosyncratic recipes through their bloodline, which inevitably means that no two Pad Thais, for instance, are the same. Variety in the details can be spotted throughout Thai cuisine.

There are 4 distinct regional cuisines within Thailand:

Up in the northern highlands, stretching across from Mae Hong Son, Chiang Mai, Lamphang, Phrae, Nan and up to Chiang Rai, the region of the former Lanna Kingdom enjoys a cuisine heavily influenced by neighbouring Myanmar, Northern Laos and Yunnan, China. A colder climate up here in the mountains allows for a wider variety of vegetables to be grown and harvested so dishes are typically veggie heavy. When it comes to meat, pork and offal are well represented.

The Northeast of Thailand, also known as Isaan, is famous for its incredibly flavourful and spicy dishes, including salads and sauces. As this has traditionally been one of the poorest regions of Thailand, thanks to the arid Khorat Plateau not being an optimal environment for rice farming, local cooks were forced to make the more expensive meats and salad dishes as flavourful as possible so people would be encouraged to eat more of the cheaper rice in a bid to soak up those flavours.

In contrast to Isaan, Central Thailand is one of the richer regions of the country thanks to the flat, wet and fertile plains perfect for rice growing, and being the site of several ancient kingdoms, including Sukothai, Ayutthaya, Thonburi and now, of course, Bangkok. Vegetables and seafood are abundant in central cuisine. 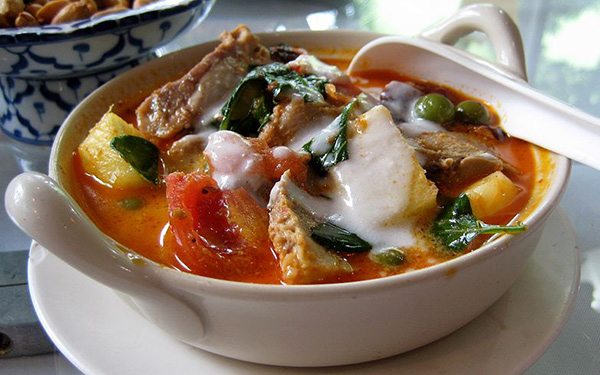 A curry from the Central region, influenced by the Ayutthaya palace cuisine (By Terence Ong: Creative Commons)

Although much of the Central cuisine brings in influences from all over the country, they also have a few distinct ones of their own, including Chinese and palace-style cooking. Travelling to the South of Thailand can sometimes feel like you’re in a different country as the local culture is so separate from the more northern provinces. Malay, Indian, Indonesian and general Muslim influence is keenly felt in Southern cuisine, with much emphasis on curries and spice.

Coconut milk and cream play a large role in many dishes here, thanks to the plethora of palm trees and coconut plantations. Unsurprisingly, given its location straddling both the Andaman Sea and Gulf of Thailand, seafood is abundant in the south and is widespread in dishes here.

Southern food is also known for being incredibly spicy so watch out!

Most Thai dishes can be easily grouped into a certain category, with variation between dishes seen in the details: what type of rice or noodles is used, for instance, the flavour of the broth, type of meat, accompanying sauce, etc.

Rice is often referred to as the backbone of Thai cuisine so it should be no surprise that there are an plethora of such dishes in Thai cuisine. It’s usually accompanied by meat in some configuration or another, plus a broth or sauce. Thais love their noodles and fried with a mix of meats and vegetables is the ideal one-dish lunch for many. There are an absolute bounty of difference types of noodle, which we’ll look at shortly.

Noodles in soup is also a super popular Thai dish, often seen being served up by street vendors for the lunchtime and dinner crowd, and originally brought to Thailand from China many moons ago. The dish varies according to the type of noodles used, the broth added and meat used.

Thai salads are probably not like any you’ve had before: imagine vegetables and meat combined with sweet, sour, salty and spicy flavours. Yam (salads) are especially popular in Isaan cuisine. Each regional cuisine in Thailand sports their own versions of curry, all made with curry paste, fresh herbs and aromatic leaves. The paste is usually combined with either water or coconut milk (the latter is particularly prevalent in the South).

Incredibly flavourful, often spicy, soups are one of the most famous components of Thai cuisine. Aromatic and nourishing, no Thai meal eaten family style is complete with a big steaming bowl of soup to dip your spoons and sticky rice in.

Vegetarianism isn’t exactly widespread in Thailand but the Thais sure do love their vegetables. They can be found in the majority of dishes, from curries to soups, but are also the main focus of various stand-alone dishes too. Thai cuisine also has plenty of dishes where the focus is solely on the meat, and any rice or noodles can be ordered separately to accompany the dish. If you thought that there was more than enough sugar in savoury Thai cuisine for us to forgo dessert, then you are very much mistaken. Thai people love their sweet treats and these can be found across restaurants, street carts, and ready to take home in luxury shopping malls.

The variety doesn’t stop at meat and vegetables when it comes to Thai cuisine: there are also an array of different noodle configurations to choose from and a few rice options too. Most Thai dishes and buffets will be served up with a small dish of dipping sauce. The exact sauce might vary depending on the particular dish or regional cuisine but there are a few served time and time again.

It should be clear from the huge variety of dishes, sauces and starches, that Thai cuisine is very heavy on ingredients. As David Thompson said, simplicity this ain’t.

If you’re planning on stocking a Thai kitchen, here are some of the major items that should be on your shopping list: If you’re keen to get into the kitchen and put your newfound (or refreshed) knowledge to use, it’s a great idea to seek inspiration from the Thai chefs and bloggers who are doing the experimentation for you.

Thai food bloggers are almost two-a-penny, but there a few who easily stand out from the crowd: