You are at:Home»Bangkok»This Might Just Be The Best Indian Restaurant On Sukhumvit Road…

As one of the world’s best cities for international cuisine, it’s no surprise that Bangkok boasts an array of excellent Indian restaurants.

Whether it’s Asia’s best restaurant Gaggan, neighbourhood favourite Indus, homely Mrs Balbir’s or even just the plethora of streetside roti available, Bangkok’s got Indian pretty much down to a “t”.

We at What’s On Sukhumvit are more than partial to a dollop of Indian cuisine and assumed we had got Sukhumvit’s offerings pretty much covered – until we were invited to check out The Great Kabab Factory (TGKF) on Soi 2.

Somewhat naively, we had assumed until that point that the restaurant adjoined to the Majestic Grande Hotel was in fact a Turkish or Lebanese kebab house rather than a branch of the successful Indian franchise borne out of Delhi in the late 90s. That’ll teach us.

It’s not only TGKF’s name that stands out alongside Sukhumvit’s other neighbourhood Indian eateries: it’s their whole concept. With no a la carte menu and instead simply two sizes of set menu to choose from (with vegetarian and non-vegetarian options available), TGKF offers a sit-down buffet experience whereby you have unlimited servings of your chosen menu dished up by an attentive waiter.

We know what you’re thinking – attentive waiters on Sukhumvit? – but we promise, they’re exceptionally attentive at TGKF.

The A Regal Journey set menu (non-vegetarian ฿950; vegetarian ฿850) starts with four kababs, brought out fresh off the tandoor and accompanied by a number of chutneys. Your aforementioned attentive waiter will advise on the best chutney to garnish on each kabab. 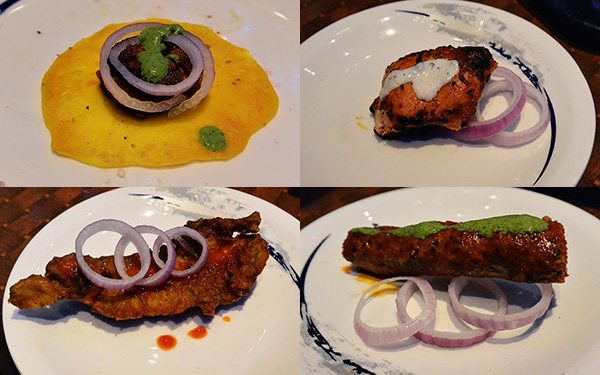 As indicated by the restaurant’s name, the kababs are the real star of the show, with our favourites being the incredibly succulent chicken Angar Murgh Tikka and TGKF’s signature Galouti Kabab of minced lamb tinged with Indian spices. The flavours and the freshness, as well as the helpful descriptions and advice from the waiters, really cement TGKF as a reasonably priced fine dining destination.

Next to be served are deliciously fragrant flatbreads before the main course – an assortment of curry, dal and biryani with accompanying naan. While this might sound like a blow-out worthy of a stag do on Brick Lane, fear not – the portions are small tasters, although there’s plenty of opportunity for more if you so desire. After a few moments respite, out come the desserts which are rotated daily. We’ll confess to not usually being the greatest fans of Indian dessert – the syrups and fried goods generally sit too heavy on a bed of curry and rice – but TGKF’s offerings are refreshing and light, a sweet close to an artful menu. This was undoubtedly some of the best Indian food we’ve had in Bangkok – those kababs! – and without a doubt, the most underrated Indian restaurant in the Sukhumvit area.

Despite more or less unanimously glowing reviews on Tripadvisor, however, the restaurant was pretty quiet when we visited on a Thursday night. This must be down in large part to its location; nestled half way down Soi 2, a quiet street home to a handful of hotels, and perhaps erroneously written off as nothing more than your standard hotel restaurant – an injustice in our eyes. Aside from an innovative and excellently executed menu at a good price, the patience and thoughtfulness of the service together with with the gentle ambiance makes for a brilliant restaurant experience – it’s definitely somewhere we’ll be heading back to soon.