You are at:Home»Bangkok»Soi 12: Home To The World’s Most Dangerous Hammock

Riding the thin line between Nana and Asok, Sukhumvit Soi 12 is one of the area’s quieter sois.

Probably best known as the home to the bizarre Cabbages & Condoms restaurant, it’s a beautifully leafy little street with no pavements, a bunch of imposing apartment blocks and the inevitable handful of street food carts.

And also this, the world’s most dangerous hammock: What the shit is this. 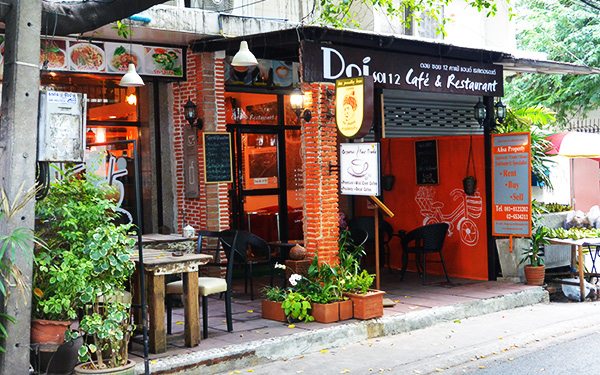 Soi 12 isn’t quite what you’d term a “happening” soi, but there’s still a handful of cafes you can get your teeth into. Most notable is Doi Chaang at the top of the soi with its organic, fair trade java and Brown Eyes, towards the end, which doubles up as a cookery studio. You can also find the Full Moon Bakery on the corner of Sukhumvit.

As far as restaurants go, Korean is particularly well served with the adopted ‘Korea Town’ in Sukhumvit Plaza which backs onto Soi 12. Outlets are too numerous to name but include Kyochon, Myeong Ga and Doorae for starters. For Thai, it’s none other than Cabbages & Condoms, Darling Seafood or the street food carts and canteens scattered down the soi. Sukhumvit 12 is a soi of extremes when it comes to a nightlife scene: no bars, just one of Bangkok’s most popular nightclubs and a hostess club. Insanity is one of Bangkok’s biggest clubs and boasts a regular roster of special events and guest DJs.

The Den, on the other hand, calls itself “Bangkok’s Premier Gentlemen’s Lounge”. We have no clue on whether it lives up to its epithet, but it gave off somewhat of a run-down boudoir vibe on the sunny Friday afternoon we passed by. We were surprised to find two hotels tucked away down Soi 12 – Galleria 12 and Sukhumvit 12 – which are probably in the perfect location if you fancy a quieter atmosphere while still being in walking distance of Nana’s busier spots. The Galleria 12 is a 4* hotel towards the end of Soi 12, tucked away in a quiet spot yet still just a short walk from the Sukhumvit main road.

It’s home to over 160 rooms and suites, as well as the Tabloid bar and restaurant, a fully equipped gym, swimming pool and limousine service.

This hotel has a selection of rooms and suites, including business and executive suites. They also have a large, 20-metre swimming pool, fully equipped gym and a ‘garden oasis’.

Aside from the nearby restaurants on offer, guests also have the option of dining at Sukhumvit 12’s in-house Boccone Trattoria restaurant.

Like much of the Nana neighbourhood, massage parlours are a common find along Soi 12. There’s the professional-looking Lavana Spa and The King and I, alongside smaller joints like Lucky 12 Massage and Darling Massage. A cursory Google search suggests the latter specialises in, er, soapy massages. Just FYI. Need a bit of washing done? Dee Heng will get it done for ฿80 per kg (฿120 for ironing too) while the uniquely named Laundry Shop advertise the same deal for ฿60 per kg. We don’t have much of a handle on home economics but that seems like a good deal… In case you fancy an impromptu trip down to Pattaya, there are a few eager taxi stands willing to barter too.